If you have read my blog at all you know that I am a SUCKER for a delicious simple soup.  I eat soup all four seasons of the year – I find it incredibly comforting and soothing, especially for my voice which is often stretched to its limit by my work.

When I was a young thing and had a stomach of steel I use to love cream based soups. That time for me passed in my early twenties. One day to the next and cream based soups were no longer my friends. Has that ever happened to you with food?

Onwards. There are so many wonderful vegan options and potato has been long known to create a cream like consistency (think Potato Leek soup).  In this soup you use both coconut milk (don’t worry the flavor of the coconut doesn’t pack a punch) and potato. 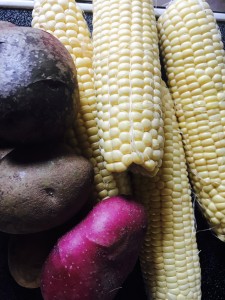 n from cob
1 can coconut milk
4 large potatoes, peeled and chunked
4 cups vegetable stock
Salt and Pepper to taste
LOVE – this is the most important ingredient