Warriors of the Rainbow

Yesterday I was washing dishes while starring out my window when the most beautiful rainbow appeared. At first I stared in awe and then I ran from window to window trying to see the full arc.  Its beauty compelled me outside and while I expected it to be fleeting it was present long enough for me to drag my dog around pointing it out to strangers. 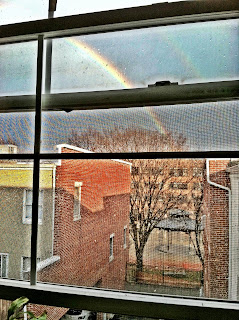 I am sure they thought I was utterly crazy but it was important.  A rainbow is always special but a rainbow mid-day on New Year’s seemed particularly magic. If I had been outdoors alone I would have danced around and sang a song. If I had been in charge of a group of students we definitely would have had a full blown kumbayah moment.  But since I was on a street with strangers I resigned myself to being polite and asking them to please “look up.”
Years ago when I was studying art history I became fascinated with Native American pottery.  Many of my professors were also curators at the MFA in Boston and I was lucky enough to hold many objects during my program. Truth be told when I handled the ancient pieces I felt like they were singing to me.   When I graduated I moved to New Mexico and fell madly in love with the desert and its peoples.  Yesterday, when I stood at the window staring at the colored bow crossing the heavens I whispered the prophecy of the Rainbow Warriors and sent a kiss to the sky.
“….there shall arise a new tribe of all colors and all creeds.  This tribe shall be called The Warriors of the Rainbow and it will put its faith in actions not words.”